Home > Leadership and Management > Challenges in team building in organizations in the post-covid scenario.

Challenges in team building in organizations in the post-covid scenario.

Shaumi has been the team leader in one of the divisions of a multi-national company. She appears to be a little worried since a few days after the doors of the office has been opened for all the employees. “I find there is less team spirit among the members of the team after people have come back from covid” she claims. “People are more independent, individualistic and relate to each other much less as they did in the pre-covid times.”.

Ananth is heading a sales group of an edu-tech company. He finds less coordination among the members of the team after they returned to their office in the last one month. “Sir, they are less cordial, aren’t as open as they were earlier.” He continues ‘There is less of sharing in free time and often a few looks as if they are lost.”

Well, one could hear such observations across the board immaterial of the organizations. Possibly, it appears to be a reflection of the impact of the viral and more so, the challenges people faced during the last one year and a half. Some of the challenges are born out of the impact of covid experiences in the psyche of the people. 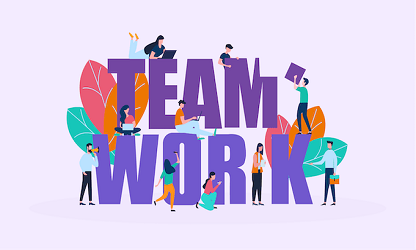 1.The hangover of the distress signals

Though the impact of the viral has decreased substantially (if not fully), the psychological distress it brought in the minds of the people has not been totally eliminated. It will continue to haunt for several months or an year for the people, and they may take quite a time to outlive those emotions experienced, or they have seen the suffering of the members of the family, near and dear, neighbors and colleagues. The melancholy arising out of the pain suffered by any of these people to differing levels either directly or through empathy will continue to be the nucleus of their life systems for some time. This has resulted in reduced communication, withdrawal into shells, or isolated behavior. As they carry these feeling within wherever they go, it would impact their professional environment and their work-style models. They are likely to be less open to interactions.

2. Impact of the changes in social networking

Reasonable amount of disconnects in social networking on the personal mode has happened during the covid times. ‘Well, it is no good bothering others when they are suffering or worried.” “I think it is better to keep to ourselves rather than expanding our scope for interactions in such times.’ And several other thoughts seeking social distancing not only in the personal mode but in social network have happened. Hence many have felt that such changes have enhanced their comfort levels, saved their time and brought down some amount of personal stress. To reposition themselves and to re-engineer into the old pattern would need more time and support.

Vikram, who was a market guy, observed “I don’t know why should we go and meet people at their doors at all. In the last one year, all our contacts and discussions have been on mobiles and yet we were able to get our business or get things done. That saves us time for travel, waiting time etc.,’ Back to workstations, the impact of such attitudes appears to be playing a role. When his team colleague asked “when would you call me for discussion on this?’ Vikram replied ‘Why should we spend on calling time? Please send your proposals on what’s app or through mail, I will attend to that.” Shifts in attitudes and inter-personnel relationship patterns are seen. Many are hesitant to take even mobile calls and prefer chatting on WhatsApp without any personal interaction. May be, that things will come back to the earlier level, but it will certainly take more time. And even if it does, one could see changes from the old styles.

4. Issues relating to self- dentity and self-worth

There are also a few people who have suffered some kind of crisis in their ident and self-worth due to deficits in income, irregular salaries, fear of living, job loss, possible reduction in cadres and the like. The constant fear of such challenges brought down their confidence profile significantly impacting their self-worth leading to mild depressions. Hence, they went into a self-protective mode by displaying poor self-worth. Consequently, back to office, they are in a protective mode reducing their levels of connectivity consciously. Inability to vent their feelings, emotions and hesitation for open discussion are seen.

A number of people are engaging into a ‘safe mode’ of operation, for fear of exposure. Having been away from their colleagues for a pretty long time, they are not sure of the profile changes in those of their team members. Lack of ‘openness’ on the part of their colleagues drive a few of them to a sense of mistrust. It would indeed take a few months for the cloud to clear the skies.

A number of people have been raising questions in their mind, consequent to their experiences with covid climate, 'is this what i wanted to do in my life?' They feel possibly they must take up assignments which are less taxing and would give more time to family and personal life. The trauma of covid has impacted their thought architecture about the purpose of life. However, they want to give some time to themselves and return to their profession with more as a placer for hibernation. One cannot predict too soon whether these people will really get into their old mainstream.

All these do put in the HR departments, additional responsibilities to develop a congenial atmosphere to promote higher cohesion, higher participation in the working environment. ‘Mini-games’, ‘short entertainments’ giving opportunities for participation, interaction and communication have to be put in place. Some organizations might even need articulated counselling sessions and talks on life skills to encourage their staff to return to normalcy and celebrate their identity and self-worth. These exercises are needed not necessarily for the welfare of a specific organization, but as endeavors of a corporate responsibility to a social structure.